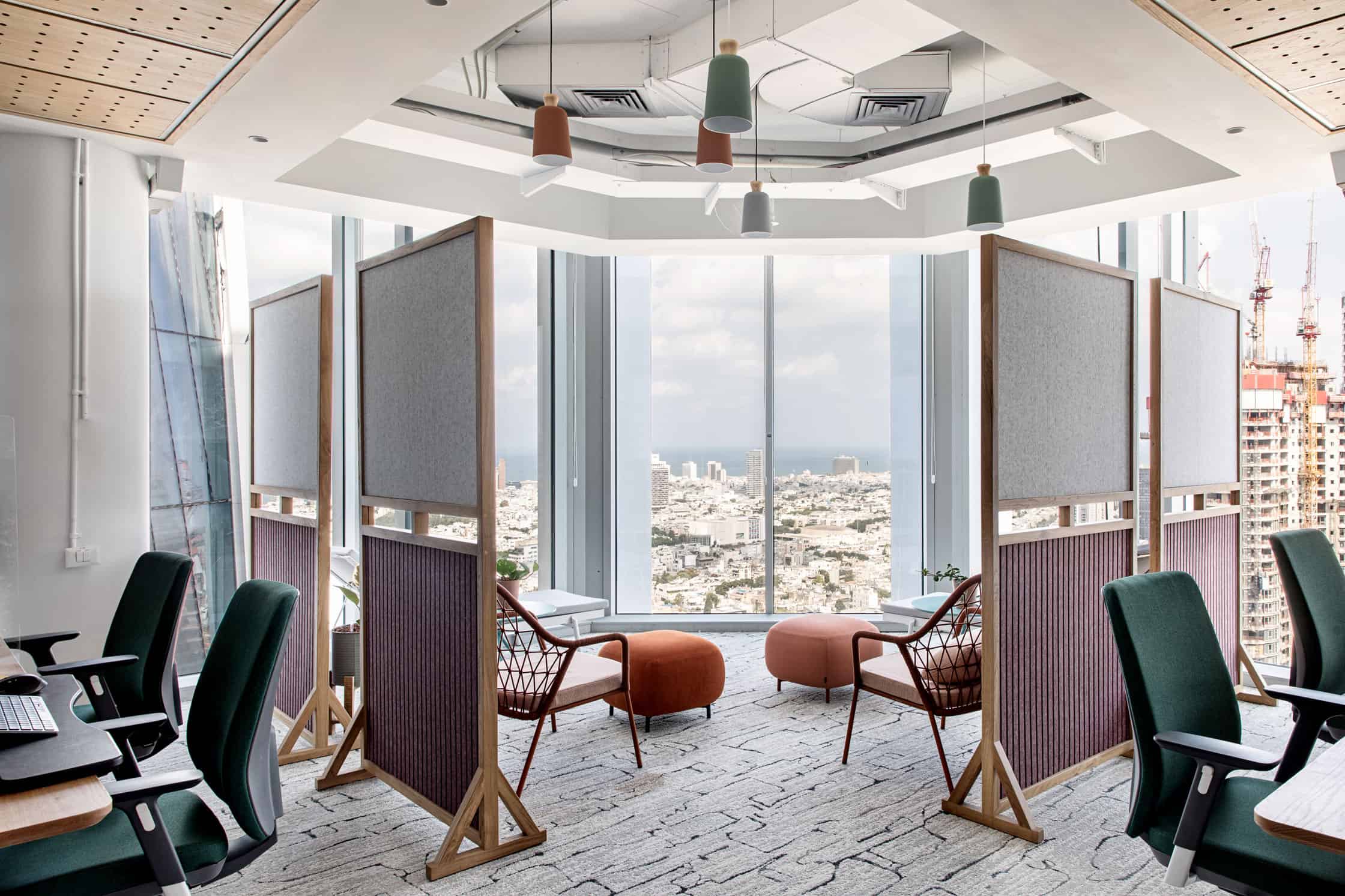 The company’s flagship project spans over 17,000 square meters in Rubinstein’s TOU Tower, and was meticulously planned according to detailed specifications—designated spaces, sleep capsules, concept areas, kitchens and indoor staircases, along with “ordinary” office spaces, conference rooms, Phone both, etc… All were executed to the highest standards.

Initially, the project’s team was instructed to communicate directly with the head foundation contractor, who was in charge of the construction site, in order to create supply chains for the project, as well as provide safety training for the contractors. Simultaneously, it was critical to fully understand the repercussions of working on such high levels with open curtain walls. In other words, there was a need for excessive attention to safety protocols and construction in areas that were not prepared for safe labor. The name of the game was being dynamic and compliant.

Following this, the team was able start working with the various contractors on different floors. For this purpose, we created a unique workflow for this specific construction site, including a professional designated foreman for every three floors, accompanied by two execution engineers and a head project manager which would direct the entire team.

The work started while the building itself was still in its execution stages—the curtain walls open in several locations, jack posts supporting the ceiling and the building was even under the management of the foundation contractor. Working in harmony with the different authorities in this instance is an entire project by itself; in terms of both the coordination of contractors and suppliers, and safety measures.

The architectural plans—down to the most minute detail—along with incorporating the building’s systems within green building standards, truly set this project apart from others. The phrase “see the glass half full”, depicts the spirit of this project perfectly, both figuratively and literally. Recycling drained air-conditioning greywater for flushing toilets, using the elevator shafts on the bottom floors to create additional work spaces, as well as creating smart and economical communication and electrical infrastructure that is highly integrated withing the building’s systems—especially within the office space—in order to reduce energy usage. For example, electric blinds, air-conditioners, lighting, etc…all connected to a unique control system, that can autonomously turn on and off the different systems, based on human presence in different areas. Concept spaces, such as the FAB LAB—a space that promotes creativity and crafting, with a Gymboree for children, a beauty salon and barbershop, special sleep capsules for recharging, an integrated clinic for office employees, along with a steel staircase combined with wooden touches that we created following the completion of the all 15 floors, and so much more.

We used the services of two different architecture firms that were assigned different areas, each contributing their unique spirit to the project. The design by the talented architect, Roee David, is this project’s crowning glory, as well as a source for breaking the boundaries of imagination.

The design is one-of-a-kind and incredibly meticulous, made up of a multitude of themes and colors and distributed between each room and area in a different manner. Ceilings combined with seemingly floating aprons incorporating bold colors, custom-made wooden tiled floors and plywood hanging on the walls for acoustics—are all just a few examples that portray the great attention to detail that went into this project.

When transitioning between the different floors, one cannot overlook the sensation of exiting one world and entering another, all within mere seconds. The ambience that has been created due to the unique design, along with the thorough execution, drives one to pause a moment, take in the surroundings and devote oneself to the ferocity of the setting!

The team went out of their way and through tremendous efforts to face this project’s challenges—whether it be the exterior: the foundation contractor and building execution according to the Form 4 regulations, or the interior: the development of workflows, dealing with unexpected challenges on a daily basis, complex logistics and directing contractors on many different levels—all while maintaining particular attention to detail.

The project’s added value lies not only in the execution and architectural plans, but also in the fact that it is a source for breaking boundaries and barriers, an inspiration for independent thought, as well as self and team development.

1 impressive and successful project that is making a whole lot of buzz!

MONDAY, you have doubtlessly given us the motivation to start off our week with you!