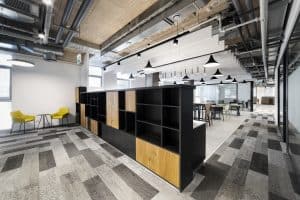 In 2018, HP rented a 6-story building in the Nes Ziona Science Park, as part of the expansion of its activity in Israel.

Due to the complexity of this project, it was conducted in a number of stages.  First, the laboratories were built on the ground floor in two wings, east and west.  In the first stage, the concrete floor was laid in order to carry the weight of the equipment in the halls.  Next, the complex systems were installed, while maintaining the maximal height to enable the future moving of the equipment in the hall.  On this floor, we built an elevator shaft to serve the first floor (central kitchen).  For this purpose, it was necessary to meticulously plan and work within the restrictions and according to the instructions of the consultants, including sawing ceilings and floors, basic work including drilling stakes inside an existing structure, building an elevator shaft, breaking through openings on the façades of the building, making accommodations and installing shutters and doors.

The second part of the project – Executing meticulous finishing work on the second and fifth floors, offices that feature floor to ceiling partitions and open spaces, using various raw materials, and a number of ceiling and floor types.  On each floor, there is a large cafeteria and seating area, conference rooms, employee relaxation rooms,  phone bots, communication rooms and storage rooms.  All the columns on the floors were polished and were given a sealer finish (exposed concrete).  On each floor, restroom stalls for men and women were built, in total there were 40 restroom stalls on the floors.

The third part of the project – construction work and systems, including kitchens on the first and sixth floor.  On the first floor there is a central kitchen (meat) and a dining room for 500 diners.  In addition, there was construction of an external staircase which will require foundation work, sawing and framing.

The sixth floor features a dairy kitchen and a dining room for 100 diners.  Training rooms, a yoga room and a gym with state-of-the-art equipment, and showers and restrooms will be built to serve all the floor’s visitors.