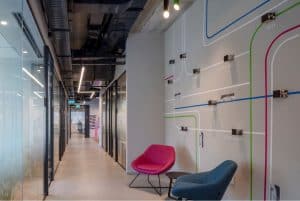 During the project, we encountered two interesting and unique challenges:

The first challenge – Changing the type of ceilings in the hallways and the open space from acoustic and gypsum ceilings to ceilings with exposed systems.

During the project, the client decided that he wanted to change all the planned ceilings in the hallways from mineral and gypsum ceilings to exposed ceilings that included electrical, air conditioning systems and visible sprinklers.

Based on this instruction, we began to plan and implement systems that suited the exposed ceilings, while maintaining the quality, precision, acoustics and appearance that suit the nature of the project and the company and while meeting the deadlines.

Upon completion of the project, the exposed systems were painted in different shades and the result was unique and amazing.

The ceiling was planned for the reception area, cafeteria and conference rooms.  The ceiling or actually the suspended tiles serve as an element for absorbing noise and increase the absorption capacity, which contributes to an increase in the rooms’ acoustics.

The ceilings were constructed based on the plans and the manufacturer’s instructions, while maintaining the quality and appearance and the architectural vision.

Note that Afikim is a privately owned company and was a very important and special client with a special character and taste.  Consequently, the entire construction and planning of the execution of the work was conducted meticulously, at the highest quality and level of work, while sticking to a tight schedule.

The team of employees and managers enlisted to deliver the site to the client on the highest level and subject to the challenging scheduling constraints.

Every step and problem was handled, with the close support of the construction manager, the project manager and the office staff.  Note that the management company and the client supported all stages of the project and met all the requests, investing efforts in order to advance the project effectively and professionally.

The company allocated the necessary resources in order to reach an optimal outcome in terms of quality, execution and meeting of deadlines.

I greatly enjoyed executing the project, which was very challenging and taught me a great deal.  I anxiously await the next project.