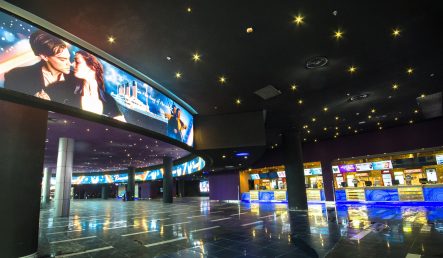 Share on facebook
Share on linkedin
Share on whatsapp
Share on email
Yes Planet and Ishpro Mall in Beer Sheva These are projects, which carried out in parallel in the ground floor and in the cinema floor, totaling 11,000 square meters for the cinemas of
Israel Theaters Company and a shopping mall with a total area of ​​10,000 square meters. It includes finishing work in the mall and additional work outside of the mall. The cinema includes 18

movie theaters, a VIP area with two halls, a dining area with a cooking kitchen, a DX4 hall, an advanced Atmos Dolby hall and an IMAX hall, as well as public areas such as buffets, cashiers, a large lobby, screening lobby and disabled passageway.

The construction work was characterized by many details, including gypsum with composed cornices with lower LED lighting, arched flooring, PVC works and carpets in all halls and in the foyer areas, and special paint works.During the work, we encountered many engineering and performance challenges due to complex and integrated work with many systems. The work in the halls was carried out with scaffolding all over the hall and with hanging scaffolding.

The work at the mall was carried out at heights of 16 meters on different level platforms. It includes special complex gypsum works, with skylights all along the mall, special inclined lighting cornice, kinetic lighting ceiling at the entrance hall, and perforated plaster ceilings with curved shapes. Many ceilings were installed on steel construction due to the height and complexity of work. In addition, large-scale painting works were carried out in various shades, dry stone was installed on the facades of the building and acrylic plaster was applied to black plaster on additional facades.

We performed paving works in large areas, public toilets with floor partitions, printed glass ceiling including graphic design, and special glass railings in the upper and lower surfaces of the floor. We also constructed an elevator shaft to a height of 21 meters from steel and glass construction to create a transparent lift shaft for the main elevators in the center of the mall.The logistics and transportation were a challenge because everything was made through a narrow and limited area of ​​the mall located on the ground floor, which was also in the finishing stage.As the company´s execution manger, including these two projects, I faced two main difficulties.

One was to synchronize all the professionals who worked on high altitude platforms with weights of 3 tons or more and to allow material and equipment to enter the cinema with forklifts, cranes and other heavy tools. In addition, to evacuate waste and garbage with Power Shovel and containers. In parallel, we had to perform finishing work on the mall floor such as paving, installing glass railings, complex plaster ceilings finishing, and to do installation of ceilings, displays and handrails heavy steel constructions in both projects in parallel. For each area, I assigned a work manager with unique tasks only to him, a project manager and performance manager.

We made morning and evening meetings to coordinate activities throughout the project in order to maximize execution in all work areas and reduce safety risks and injuries during the work process.The second problem was to address the issue of work force, resulting from the complexity of coordination and control of the distribution of personnel and subcontractors. During the peak time, 400 workers with various professionals were in the project.
I had to manage, coordinate and schedule all of them in favor of ending all tasks and maintaining the safety. In addition, the work was carried out on tight schedules and subject to client changes and additions during the work. In order to meet the objectives of the work, it was carried out intensively during the day and night.

The completion of the project and its populating was concentrated into two critical weeks in which we had to hand over the cinema floor, and two weeks later the mall itself. A date for a large cinema opening event was set, and to meet the goal we brought in many finishing subcontractors, homogeneous teams of the company and a large number of cleaning workers who worked 24/7.

They made the finishing, the final repairs and the cleaning work in parallel to operating the cinema systems, final tests and running of the cinema halls.

The inaugural event was very successful and received many compliments.Two weeks later, the shopping mall was opened in the same format, but unlike the cinema, we had to allow the shops owners to carry out the adjustment works each one in his store, which only increased the pressure and made it difficult to protect the works that already been completed.